A healthcare milestone in Lebanon

Reuters, As-safir and L’Orient Le Jour were present among other media. 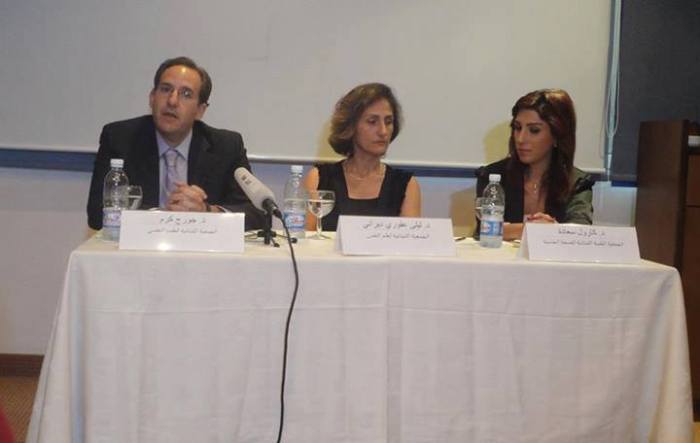 This press conference comes three months after LebMASH released their position statement on what used to be called “conversion or reparative therapy”. The name was changed to “Sexual Orientation Change Efforts” as there was nothing therapeutic discovered about it. On The contrary, the practice has been proven to be harmful to patients. SOCE is now banned in many countries.

The Lebanese Psychiatric Society (LPS) released their milestone position statement on the issue on July 11 2013 followed by a wide national and international media coverage.

What triggered these organizations to take a stand to ensure patient safety and professional conduct of healthcare practitioners? Helem and MARSA (Sexual health Center in Beirut) has been receiving reports from the lesbian and gay community about reparative practices in the country. In addition, a TV station hosted someone who claims to have “converted” from homosexuality. Another TV station hosted someone who claims to be a psychologist (I personally received reports that he is not but I could not verify those facts) and who has a lot of misconceptions about homosexuality that he presented as facts. LebMASH responded with a press release that reached LPA and LPS.

Dr. Carole Saade from LebMASH commenced by explaining that the recent statements do not only impact Lebanese citizens’ and residents’ heath but also their basic human rights.

Dr. Leila Akoury Dirani from LPA called for efforts to change the public opinion that still believes homosexuality is a disorder. “Psychologists should make it clear to parents that there is no cure or treatment for homosexuality” she said. “I believe that no real psychologist does reparative treatment. There are some people claiming to be psychologists that do”

Dr. Georges Karam from LPS explained that “there is no proof that homosexuality is a disease, and the so-called treatments are hurtful and causing more problems”. He said that sexual orientation change attempts ” can be harmful, so as psychiatrists we are strictly against such practices.”

Article 534 of the Lebanese Penal Code states that “any sexual intercourse ‘against nature’ is punishable by one year in prison.” The panel of health experts agreed that homosexuality does not qualify to be labeled ‘against nature’ neither does any sexual act between two consenting adults of the same gender. In their opinion Article 534 can NOT be applied to criminalize homosexuals. When Lawyer Nizar Saghieh, a champion in human rights and founder of the Legal Agenda, asked the panel if healthcare providers are willing to attest to that in court, the answer was positive.

In my opinion, the three strongest take-home messages delivered by this conference are:

So to all the kids out there forced by their parents to see a psychiatrist/psychologist, look that provider in the eye and remind them of what their Lebanese organizations have declared “Homosexuality is not disease and requires no treatment.”

To all bullied lesbian and gay individuals, especially on social media, you have few links you can share to educate others.

To all concerned parents, you now know what medicine and the scientific evidence say. It is not an easy journey coming out in Lebanon as parents of a gay son or a lesbian daughter, the road to acceptance is an uneasy one, accepting your kids the way they are and the society’s acceptance for you as parents of homosexual kids.

To law enforcement personnel, after the Batroun Judge ruling in 2005 against using article 534 to persecute homosexuals and the current position of health experts and health organizations on homosexuality not being ‘against nature’, the doors are closed on this antique French colonial article and its inhumane uses.

I agree the discussion would have been different if it was carried with politicians, religious people or the public, but it was not. As health care providers, we have a duty to provide you with the most accurate health care information supported by scientific evidence and unbiased by mainstream opinions be it political, religious or social/public.

I was not physically in the conference. Thanks to the Live Feed provided by Helem on Facebook and Twitter, I was able to sum up the content of the conference as above.