I was invited back to Bathurst, New Brunswick to provide preceptorship at Chaleur Regional Hospital to Gynaecologists who are enthusiastic about bringing Total Laparoscopic Hysterectomy (TLH) back to Northern NB. So what is the hype about this surgery?

TLH is minimally invasive. Just like we rarely remove an appendix or a gall bladder through large incisions anymore, surgeries to remove the uterus are evolving in the same direction: Laparoscopy.

Laparoscopic Hysterectomy (LH) allows for easier recovery, faster return to normal activities and less days off work than open surgery or Abdominal Hysterectomy (AH). LH causes less blood loss, fever or wound infections and leaves you with lower pain levels. It is also superior aesthetically for those concerned about that. The only disadvantage found was more urinary tract injuries and longer operating times. As surgeons gain more experience and confidence with LH, urinary tract injuries decreased and operating times got shorter.

I remember when I first started performing those surgeries in 2009, my operating time was on average four hours. As the operating room staff became more familiar with the procedure, I moved along my learning curve and trained my surgical assistant along the way, the average time for my surgery went down to one hour for straight forward cases.

What does major health organizations say?

The Society of Obstetricians and Gynecologists of Canada (SOGC):

The American College of Obstetricians and Gynecologists:

The American Association for Gynecologic Laparoscopists:

“Most hysterectomies for benign disease should be performed either vaginally or laparoscopically… Continued efforts should be taken to facilitate these approaches. Surgeons without the requisite training and skills required for the safe performance of VH or LH should enlist the aid of colleagues who do or should refer patients requiring hysterectomy to such individuals for their surgical care.”

Surgeons should offer Vaginal Hysterectomy whenever feasible as it remains the most superior and least invasive procedure for removing the uterus.

Surgeons should make all effort to offer/provide Laparoscopic Hysterectomy and should only perform open surgery as a last resort.

Where did we go wrong?

We did not! It is the natural process our field go through with every innovation. There is a delay before advancements catch up and become standard of care. We can not expect gynecologists to be performing surgeries they were never trained to do or they never did enough to be comfortable doing on their own.

During my residency training at University Hospitals Case Medical Center (UH-CMC) in Cleveland, Ohio, there was only one out of at least 20 gynecologists who was performing laparoscopic hysterectomies. I had a passion for minimally invasive surgery so I intentionally grabbed any opportunity to scrub with Dr. Thomas Janiki. I was also lucky as UH-CMC just acquired the Da Vinci Robot in the last year of my training so I spent a lot of my OR-allocated time in the Da Vinci room with the Gyn Oncologists Dr. Vivian von Gruenigen and Dr. Robert Debernardo as they mastered their new skills with robotic-assisted laparoscopy. 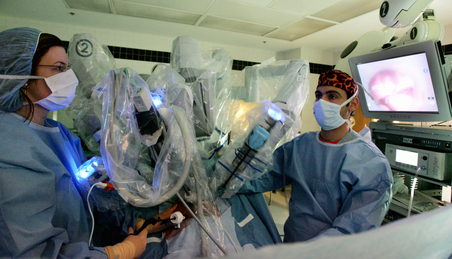 What you can do!

Many gynecologists who did not have the opportunity to train during their residency are taking courses designed for this purpose. Many such courses are available. I have tried a few and blogged about two: Oct. 2010: Bigger Surgeries. Smaller Incisions! Feb. 2012: Advance your laparoscopic hysterectomy skills

That is what Dr. Anne LeBouthillier did. In April 2013, she attended a LIGO course in San Francisco and brought back advanced skills. On Aug 1st 2013, we performed two TLH cases at Chaleur Regional Hospital to help her build the confidence needed to perform this surgery on her own. The two cases went very well. Dr. LeBouthillier demonstrated excellent skills that she carries from her long surgical experience with laparoscopic-assissted vaginal hysterectomy and added skills and confidence from the LIGO course.

Aug 1st 2013 was a very productive day with preceptorship of 2 TLH cases in operating room followed by “Total Laparoscopic Hysterectomy: Tips & Pearls” presentation for an enthusiastic team of Gynaecologists who want to bring minimally invasive surgery to their region

One course I recommend

As a preceptor with the Laparoscopic Institute for Gynecology & Oncology (LIGO), I highly recommend LIGO’s Surgical Masters’ Course in Total Laparoscopic Hysterectomy & Advanced Laparoscopic Procedures over others I have attended. The course is offered next in Atlanta, Oct. 25-26, 2013. The annual San Francisco course always has an additional day of intense hands-on cadaver laparoscopy. The next course for San Francisco is May 15-17, 2014. In 2014, LIGO course will be in Philadelphia for the first time, Oct. 10-11, 2014. Here is my review of the course as a preceptor: Laparoscopy for Gynecologists: LIGO course review

What is the LIGO course?

In the words of Dr. Katheline (Kate) O’Hanlan, the founder of LIGO: “I see a future where almost all gynecologic surgeries are performed laparoscopically through 4 small incisions… The OR is not the place to learn surgery… We learn it by developing our manual dexterity on a pelvic trainer… My vision for the LIGO course is to inspire surgeons with the knowledge and skills to offer a higher quality of healthcare to womyn ”