Home › Human Rights › My response to Mayor of Dekwaneh abuses

My response to Mayor of Dekwaneh abuses

Imagine you get a phone call from your sister telling you she was arrested on a night out and her nude photos are already circulating online.

Imagine your closeted best-friend, who fears for his life if his family knew about his sexuality, has his name publicly posted on the door of a recently shut down gay bar.

It can happen to anyone of us or the people we love and care about, so we shall not remain silent.

The Lebanese Broadcasting Corporation, LBC TV, asked the public to submit their response to the human right abuses committed by Dekwaneh Mayor Antoine Chakhtoura on April 21 2013. That night, Chakhtoura ordered a raid on Ghost Bar that caters for gay bisexual and transgender clientele. His forces carried illegal detention of people. Victims were dragged to the municipality building, where they were insulted, interrogated, forced to undress and their photos were taken. The bar was shut down few days later and the full names and date of births of 4 detained victims were posted on its door.

A tranwoman victim reported to NOW that she was verbally, physically and sexually abused.

“They hit me and pushed me around and insulted me by using derogatory terms like ‘faggot’ and ‘half-a-man,’ then they asked demeaning questions such as how much do I make per hour and whether I enjoy ‘sucking on it,’ then asked me to strip naked and then took photographs of me.”

Here are the responses that LBC chose to broadcast:

Here is my response:

Here is the segment of the news reporting on the abuse.

The mayor has already confessed to his crime on national TV:

“Of course we made them take off their clothes, we saw a scandalous situation and we had to know what these people were. Is it a woman or a man? It turned out to be a half-woman and half-man and I do not accept this in my Dekwaneh.”

So this mayor believes he can enforce his set of morals on the whole population. He played police by arresting people and he played the doctor by subjecting them to a physical. He is neither. This is a fine example of abuse of power and should be exposed and stopped.

Lebanese Lawyer Mr. Nizar Saghieh told NOW that the municipal police’s detainment of customers is illegal and should be looked into because it is a clear violation of the constitution. He urged the civil society to address the abuses as quickly as possible if the subjects decide not to sue.

Outrage is evident on social media are posters denouncing the mayor’s abuses are sprouting: 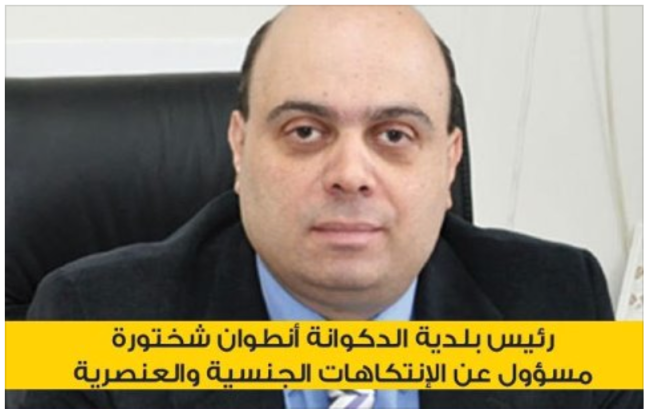 You can also follow hashtag #DekAbuse that was created for this incident.

The #LebLGBT hashtag is always handy to follow any news related to the Lebanese LGBT movement.