A new study by Dr. Elizabeth Raynmond and Dr. David Grimes published in the Green Journal (Obstetrics & Gynecology) in Feb. 2012 concluded that:

This sounds common sense to an Obstetrician & Gynecologist regardless of their political or moral position on abortion. Now, we have it in print. In the golden era of evidence based medicine, this piece of common sense information is now supported by evidence.

Here are the figures they found:

Legal abortion has been found to be safe in multiple studies. Allegations that abortion can lead to breast cancer or mental illness have been refuted.

I am not pro-choice. I am not pro-life. Actually those two terms are relatively new to me. Having studied medicine in Lebanon, the issue of abortion does not even come up in the curriculum, not even in residency training. Apparently, unwanted pregnancies do not occur in Lebanon; neither does pre-marital sex! Rape and incest in some magical way do not get womyn pregnant in the Sin City of the Middle East. Abortion is illegal in Lebanon. A woman can spend up to 5 years in prison for getting one. Abortions are being performed in Lebanon. It costs 500 to 2000 USD per abortion in a country where minimum wage is 448 USD. RU486 or mefiprostone is illegal in Lebanon but can still be found in Black Market. Read more about Lebanon’s abortion question. 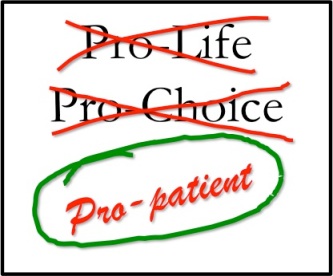 After 4 years in USA, I learned all about the choice vs. life controversy. I still could not identify with either. When asked, I say I am pro-patient. As a physician, I can not and should not impose my set of moral rules on my patients. Regardless of what my personal feelings about abortion are, I am obliged to provide my patients with facts. I owe it to them. The facts as I know it stated simple and clear: Abortion is not riskier than continuing with an unwanted pregnancy, it actually appears to be safer.

So the controversy is political and not medical. I did not spend 13 years of my life studying as much as I did to allow politics to influence my medical decisions. Patient’s safety and well being should remain the focus of any health advocate. There are more serious risks to which womyn are exposed and to which governments pay less attention. Poverty should be illegal, it is a great health risk. Smoking claims 3.1 million deaths over 7-years in USA (Pregnancy claims 2856 and abortion 64 deaths).

Dr. Mitchell Creinin stated in an editorial for the Green Journal this month that:

Abortion is safer than delivery. Regardless of personal views, every woman deserves factual medical information whenever she is faced with a decision of whether or not to terminate her pregnancy. Government should be concerned about important issues that create public health hazards. With pregnancy and abortion, more laws are promoted to limit access to a safe procedure when the alternative  is riskier.

The ethical controversy will continue. We will always agree to disagree. In the meantime facts should be provided to womyn to empower them in making well-informed decisions.